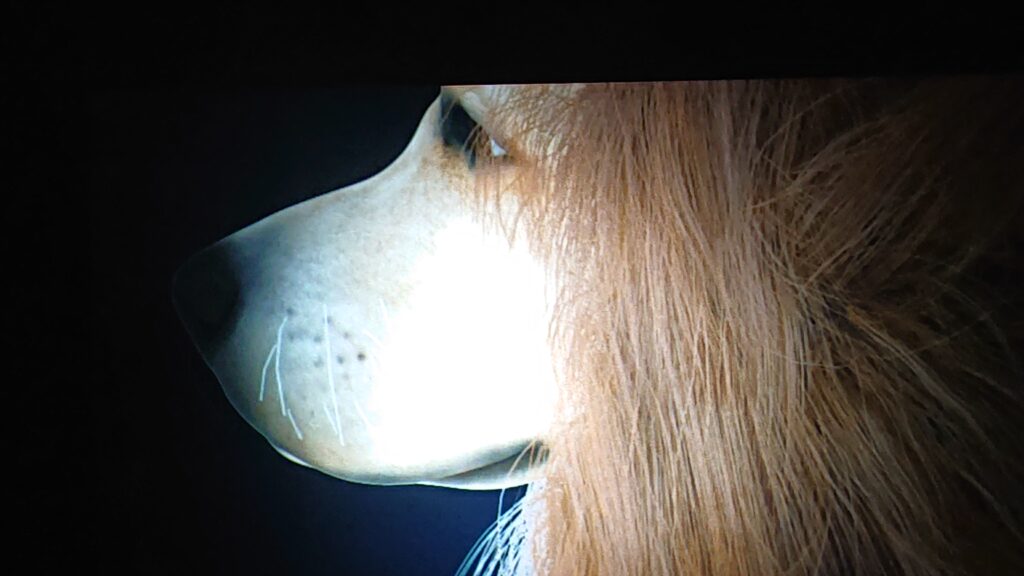 Gjerding has created a total installation, where images collide physically in front of the viewer through two video projections, that uses older film-sets’ rear projection techniques. In the work, we face a number of props, animals, and characters that together form a surreal narrative, where reality is constantly exceeded through new virtual spaces.

In the work, we meet a recognizable hybrid creature that balances between being a lion and a dog. A fusion of two species on each side of Man: the dog symbolizes the domesticated animal that has evolved in line with human needs and the lion represents the wild beast. Gjerding has also worked in clay, producing different versions of the ‘Ocarina’, a whistling instrument that is thought to have been developed over 12,000 years ago and belongs to one of the oldest instrument families. The whistle has several symbolic meanings in the work and is linked to one of the characters, the figure Princess Zelda, originally a character from the video game ‘Legend of Zelda’. Gjerding has worked with how Zelda is a mix between a prop and a person and thus balances between being passive and active.

The work stimulates a range of unthinkable situations and linguistic fusions, such as a lively glass eye inserted in Zelda and the Lion Dog. The glass eye was originally a 3D rendering of a 1920s glass eye that was used for war veterans with facial injuries. By forcing different references, eras, and realities together, Gjerding dissolves the relationship between prop and individual, prosthesis and body, as well as surface and content.

For this project we had to make a 3D dog with a lions mane, We were involved with shading, fur simulation and rendering for 4 different shots in the film. The animation was done by animation studio Ox and Bird.